The route Lafkos-Chondri Ammos follows a series of old paths that crossed this deserted zone. In the first part, the route adopts the main path that descended to Ammorema, serving the southernmost olive groves of Lafkos.

The second part of the route, from Ammorema to the shore, follows lesser, local paths, which were never cobbled, as this connection was not of particular interest to Lafkos: the geographically isolated Chondri Ammos was part of the coastal system of Platanias, where part of the connections were done with boats.

The hike starts from the center of Lafkos. After crossing the settlement, we meet the central asphalt towards Milina. Next to the Lafkos cemetery, we leave the asphalt to enter a cement road and then a dirt road.

The dirt road becomes less and less viable and finally we enter a quite well maintained downhill path, in part cobbled, which leads us to the church of Agios Ioanis in Sara.

We continue on a dirt road that passes the Ammorema ravine through the riverbed (no bridge available). Soon we enter a 1200 m long path that follows a secondary ravine. We meet a dirt road and follow it for 1600 m, where we enter a path again. The path descends sharply framed in a narrow ravine and after crossing an olive grove it meets the main dirt road Platanias-Chondri Ammos.

We follow the road and with a secondary branch we descend to the beach of Chondri Ammos. A short path brings us to the eastern edge of the large pebble beach. We cross it to its western end, where we reach the road that serves the small coastal settlement of Chondri Ammos. 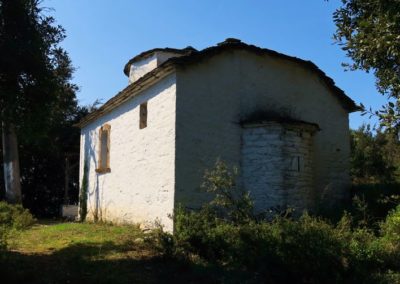 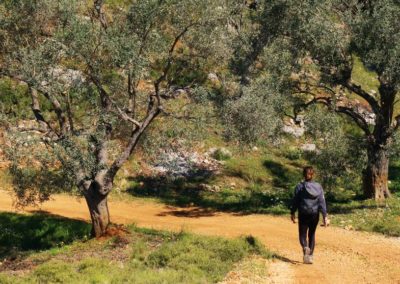 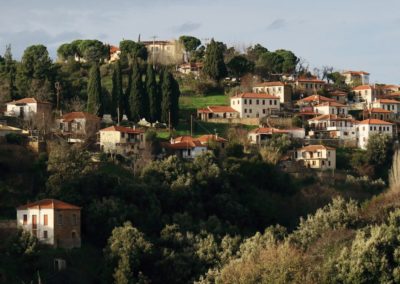